While Door 1 seems tempting, and Doors 3 and 4 are also equally so, Door 2 seems to be the right choice, so Johnny walks toward it and opens it. On the other side, he sees a rocky beach straight ahead, and a building to the left with a sign that reads “EVIL ISLAND RESEARCH AND DEVELOPMENT CENTER” in green neon. A massive mountain sits right behind it. It looks suspicious, but Johnny figures he has nothing else to do that night but go on an adventure, and steps through the door.

The rain is even stronger in this world, and Johnny wonders how any of this is possible. Regardless, he walks toward the mildly menacing building entrance (which, apart from the sign, would simply give the impression of an ordinary clinic), and opens the front door. Perhaps there’s something worth pursuing in here. Maybe some evil to stop, as the sign would imply.

Johnny, unsure of what to expect upon entering the building, is surprised to see a rather plain interior; an empty reception desk sits beyond a simple waiting area, and a long hallway leading to a set of impact doors extends to the left of the desk. There’s nothing menacing, but Johnny knows that looks can be deceiving, and a place called “Evil Island” probably isn’t using that name ironically. In fact, he reasons that there’s probably some malicious research and development going on deeper within the facility.

Feeling somewhat heroic, Johnny decides to investigate the place and makes his way toward the doors down the hall. A pang hits him, the image of his role as the doomed teenager in A Nightmare on Elm Street flooding his consciousness. He envisions himself being sucked into a bed, only to reemerge as a fountain of blood. Nevertheless, he knows he’s Johnny Depp, and that was only his first role. He has more box office power now, and thus can’t be extinguished so simply. But then he stops and remembers he’s only 25 or so, and that his older self was the one with the success. Still, at this point in his life he’s got a decent thing going with 21 Jump Street (Or does he?), and this thought gives him the courage to move forward.

Opening the impact doors, Johnny is once again surprised to find the unexpected. To the left, in this dark cave of a room, he sees a group of apelike slave men whimpering and moaning in pain, each slave held in a separate cage, with brown and white claylike designs covering their tortured faces. To the right, a man sits at a desk with wild, dirty-looking orange-yellow hair, and an icy blue glow emanates from a light source on the desk.

Johnny, unsure of what he’s stumbled upon, ultimately decides to take some form of action, and:

a. Chickens and runs away to get back through the door portal (continue on this page)
b. Tries to free slaves (page 10)
c. Confronts the man at the desk (page 11)

a. Chickens and runs away to get back through the door portal

Unexpectedly (once more) struck by fear, Johnny turns and flees after taking in the scene. He assumes the door leading back to Chicago will still sit on the beach, and runs as fast as he can to reach it.

Stepping onto the rocky beach, Johnny sees the door has vanished. Looking both ways, he is hit with a horrible thought: him, as his older self, wearing a goofy French mustache and a fake French accent, with box office numbers projected to drop, thanks to the abominable Mortdecai. 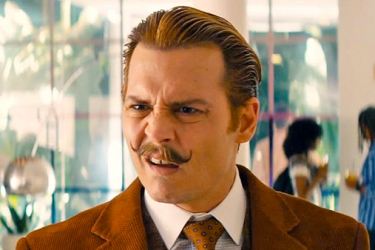 His next thought is as a French-Canadian man with a practically impossible prosthetic nose and further box office drops, thanks to Kevin Smith’s Tusk. 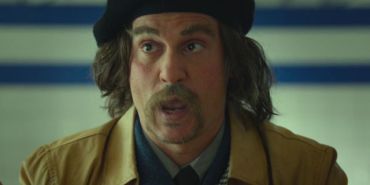 JOHNNY
(horrified)
What is happening?
What’s going on?
Why am I in such shit?

Johnny grows weaker, collapsing to the ground. He recalls being in a slew of Tim Burton films that appear contrived and unnecessary, and worst of all forgettable. Box office numbers keep dropping in his mind. Images of money being taken away from his worth flash along with images of films like The Tourist and Transcendence.

He screams in terror, feeling his strength drained. A laugh, evil and deep and sadistic, pierces through the images scrolling through his mind. Johnny turns to face the research and development center, and sees the man with the wild hair who sat at his desk. His face is contorted into something that can only be described as total unequivocal evil. The man introduces himself.

JOHNNY
W-what the fuck are you
doing to me? What is this?

DR. PONT DU LOC
You ask that question,
and others like it,
quite frequently.
It’s rather boring.

DR. PONT DU LOC
Fine, I’ll answer this
most biting of questions.
This is how you will die
this evening. What you’re
experiencing is something I
call “Box Office Drainage”.
You are, or were, a fairly
successful actor. No, that’s not
fair. You’ve been very successful.
But you see, you go from good,
intelligent independent pictures
to box office draws. And it’s
successful for a while, particularly
with the Pirates of the Caribbean
franchise. However, you wind up
starring in lazy film after lazy film
and people eventually get tired.
As you sit on a mountain of riches,
with your islands and your whatnots,
your career experiences malaise.
The man who was once on fire
is now struggling to overcome the icy waves.

JOHNNY
I need more exposition. Please.
Why are you doing this?

DR. PONT DU LOC
I’m sorry, but I can’t specify,
other than tell you the fact
that trying to evade me has resulted in
your untimely and unusual
death. If you would like another chance,
you’ll need to finish dying
and return to page 1.

JOHNNY
Page 1? What does–
(growing weaker)
What does–
(taking his last breath)
Page 1?

Without any box office appeal left within, Johnny perishes on the rocky shore.

You heard the Bad Doctor, go back to page 1. Or, if you want to be a little cheat who doesn’t want to go through the whole thing again, you can simply choose another action above.