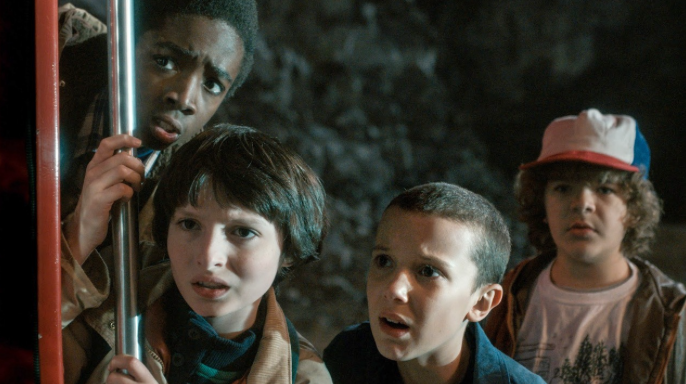 Stranger Things is riding high on the Netflix popularity train, with some incredible homages to strange ’80s horror and science fiction franchises, particularly those created by strange weirdos Stephen King and Steven Spielberg, with an amazingly strange John Carpenter-esque score composed and performed by that strange electronic band Survive. It’s one big ball of strange, and while you may know a lot about the show’s references and Millie Bobby Brown thanks to Aaron Paul’s wonderfully strange interview, here are some things that you may have overlooked.

1. Stranger Things was Originally Going to Be Called Normal Stuff 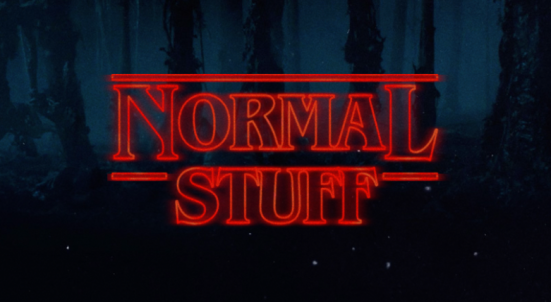 Back before the Duffer brothers knew what they wanted to do with the show, they wanted to write about normal preteens living in the 1980s, and appropriately called the script Normal Stuff. The show was originally going to feature typical pop culture of the time in the background, along with hints of Reagonomics, and the main characters were going to simply live out a basic junior high existence.

In fact, the first episode was going to involve the kids playing Dungeons and Dragons for the entire duration of the episode, with Winona Ryder’s Joyce Byers character only showing up at the end to pick Will up from Mike’s house.

Following episodes would feature scenes of the boys going to class, going back to Mike’s house to play more D&D, and Mike’s sister dating and then breaking up with Steve Harrison, and experiencing hormone-driven teenaged angst mixed with short-lived depression. Jim Hopper wasn’t even a character because no children went missing and no crimes ever occurred. Eleven and Dr. Martin Brenner were also nonexistent. And the character of Will Byers’ older brother Jonathan only had four lines of dialogue, including “Go away, Will,” and “Ugh, Will, you’re such a dork. Sometimes I wish you’d just get kidnapped by a faceless monster thing to some parallel nightmare dimension where they put worms in your mouth or something.”

Matt Duffer stated in an interview with a reputable source, “The show was just going to be Normal Stuff, about some kids hanging out and being really ’80s. We thought that’d be kind of different from shows where more exciting stuff happens. Then Ross randomly suggested we add some ‘stranger things’ to it, which I kind of liked the idea of doing, and so we spent four years rewriting it to bring some weird shit into it. We couldn’t think of a better title than the general idea once we finished, so we just stuck with the first draft working title.”

After Winona Ryder first read the script, she identified with Millie Bobby Brown’s character of Eleven, not only because Winona herself was around the age of 11 in 1983 when the show took place, but also because she recalled having telekinetic abilities and spent much of her childhood trapped in an underground research laboratory with electrodes attached to her head.

Ryder reportedly stepped in to audition for the part of Eleven, put on the voice of a younger girl, and read some of her minimalist lines to the Duffer brothers, but they instantly turned her away.

After she sobbed for 12 hours, calling the Duffer brothers once per hour to ask if she got the part and being repeatedly told “no,” they finally convinced her that she would be right for the part of Joyce Byers. She relented on one condition: She would be able to act like Eleven whenever the cameras were off, including pretending to move objects on set through telekinesis. She even shaved her head. Because of this, she had to wear a wig throughout the production.

3. All of the Kids Were Supposed to Combine into a Gigantic Mass of “Hyper Flesh” at the End

Instead of the ending we got, which was sad and mysterious enough, the ending that the Duffer brothers had in mind was vastly different.

Matt Duffer stated to another reputable source, “I really wanted to infuse some ’80s David Cronenberg-influenced elements to the script along with the other horror influences, and so did Ross.

“We had this idea that at the end of the season, all of the kids would wind up in the Upside Down world, but when they returned their cells would have been completely changed, and they all would begin to fuse together at the molecular-genetic level, like 12-year-old organic magnets. El wouldn’t be affected because she’s special and stuff, but the other boys would all turn into a ball of ‘hyper flesh’ that would look something like a giant adolescent tumor with mouths and eyes. It would pulsate a lot with these massive veins, and the kids would be screaming collectively in this horrible groan with all of their vocal cords combined into one deformed mess. El, out of mercy, would kill them the way she did the monster in the actual ending.

“Unfortunately, the Netflix producers thought it would be too dark for some reason, so we compromised by killing that useless nerd Barb instead.”

4. They Hired an Actual Ghost to Make the Lights Spell Things Out on Joyce’s Wall 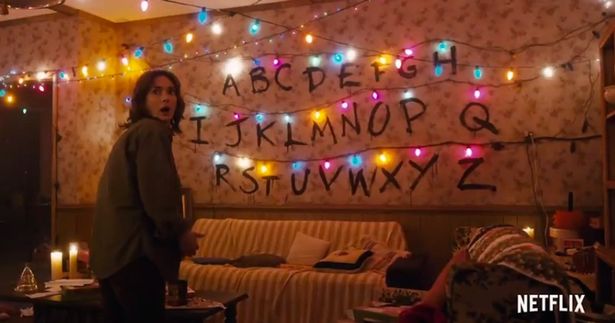 While neither of the Duffer brothers believed in ghosts prior to filming, they became firm believers when they found out that the set they used for the Byers family home was haunted by the ghost of a dead dock worker nicknamed Dozer.

They discovered this when the crew were setting up the lights and letters on the wall and jokingly asked them to spell out “Stranger Things” after they finished, when the lights actually turned on and spelled it out. When they determined it wasn’t a prank being played on them by anyone, they asked what its name was, and it spelled out “Dozer.” They asked if this was a nickname, and it replied “unfortunately yes.” They ultimately learned his occupation and other more personal details through this communication method—including that he was a closeted homosexual—and offered to let the Byers home set stand as Dozer’s permanent home if he would cooperate with them and light up what was scripted. Sure enough, he did.

So, the scenes you see in the show involving the letter lights and Joyce are actually performed by Dozer.

5. Matthew Modine Wanted His Character to Be a Zombie

After getting the part of manipulative, sadistic, and ultimately somewhat frightening Dr. Martin Brenner, Matthew Modine flatly explained to the Duffer brothers on the first day of filming his scenes that he wanted the character to be a zombie. When asked why, he refused to explain further, and simply stated, “I’m playing this part as a zombie doctor.” Reportedly, he still claims that Brenner is a zombie, and that the character’s real motivation is to develop El’s abilities because he thinks telekinetic abilities make for particularly flavorful brains. The Duffer brothers have refused to comment on these statements.

These are simply some of the “stranger things” that you may not have known about this incredible series, but we may see some of these older ideas reflected in the next season.