Arthur then pays a visit (a very reluctant one, as he takes about 30 seconds to decide whether to knock on the door) to a bleach-blonde man named Victor. He looks normal like everyone else in this film.

It turns out Victor is Arthur’s estranged brother, whom he hasn’t seen in 7 years. I guess Arthur turned into another person within that time, because Victor doesn’t recognize him when Arthur introduces himself.

“Well, the Lord must’ve sent you to me,” Victor greets. Well, there’s no way he’s going to be an antagonist in this love story, especially once he sits down beside Arthur with his Bible in his arms like a teddy bear.

“So, have you finally accepted and found the Lord Jesus Christ as your savior and finally freed yourself from these demons?” Victor politely asks.

Arthur tells him he’s there for money, which Victor suspected. He specifically asks for $2,000 for his “tuition to college.”

Victor talks to his cat like a perfectly sane person, “Oh, you hear that? Arthur needs money to go to college.” Back to Arthur, “Well that’s a far cry from your old track record, isn’t it?”

Ummm, what track record is that?

Victor asks if Arthur is still haunted by his demons, clarifying he means his homosexuality. Arthur tells him about Ben and says they’re getting married.

Victor says he’ll give Arthur $8,000 if he agrees to bring Ben to the apartment, “and respect me, and this apartment, and the Lord Jesus Christ.” Wait, is Jesus his roommate?

We see Arthur open mail back at his apartment, when he sees that Victor is going to be a bitch to deal with after all.

He gives Ben the letter.

“Who wrote this?” Ben asks, apparently forgetting he recently came out to his wife and brought up divorce, followed by a less-than-receptive response.

“I don’t know, what do you think?” Arthur asks, apparently forgetting he just spoke with his God-fearing, homophobic brother.

Arthur rips it up, and asks Ben why they can’t just get married there in California. Seemingly never having even conceived of the idea before, Ben suddenly remembers that he knows a great lawyer in Beverly Hills, and he’ll give her a call.

So, they meet with this lawyer—actually their lawyer’s secretary for some reason—who has antennae just like any normal human being.

Regardless, the lawyer’s secretary tells them that it’ll be hard to get married now because of Proposition 22, but she’ll see what she can do, all with the emotion of a robot succubus.

She explains that they should get married in Vermont, then return to Cali, and if they don’t recognize their civil union license, then they’ll have to fight with the “full faith and credibility clause.” Sounds like Mraovich really did his research for this screenplay.

Ben gives us the courtesy of paraphrasing everything she just said, which the lawyer’s secretary confirms.

Time to get a shot of their plane landing in Vermont. I never realized Vermont had palm trees. I also thought passenger planes had windows. 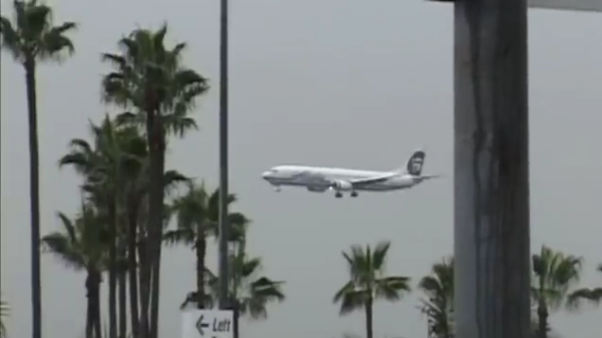 I’d almost believe they simply went to the airport in California where they were shooting and shot a random cargo plane landing, but I know Sam Mraovich is more resourceful than that.

So, our beloved couple gets married in palm-tree-rich Vermont.

The priest reads them their vows, they say their “I do”s, but when the priest asks for the rings, neither of them has them. Oh no!

But before finding the rings can become a subplot, the priest tells them they can marry without the rings. Sweet, pointless relief.

Can I just say that this is one of the best kisses I’ve seen on screen? Their chemistry is so good, they don’t even need to convincingly kiss on the lips to sell their relationship. 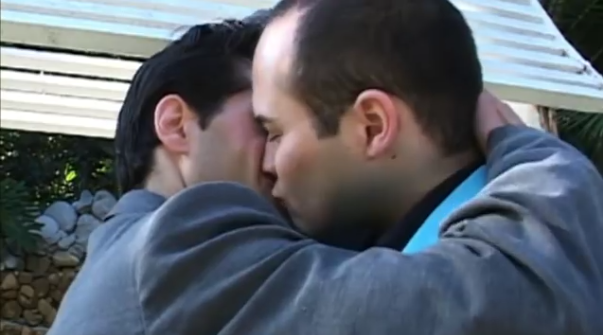 They do make some lip-to-lip contact after the ceremony, though.

Arthur expresses concerns about returning to Cali and not feeling recognized as a married couple, but Ben assures him it’s all gonna be good.

Time to fly back on the plane that is totally theirs.

Back at the lawyer’s office, the lawyer’s secretary—still not the lawyer who may or may not exist—slowly explains to them that while Prop. 22 restricts gay marriage, what they have is a civil union and they’re in the clear, with the same rights. 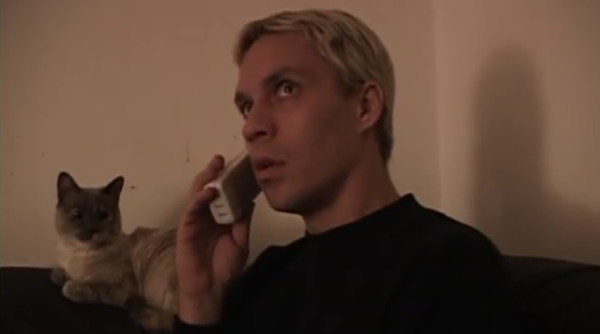 He leaves a message, telling Arthur to get back to him ASAP.

Transition to him making another call, this time petting his Jesus slave dog. 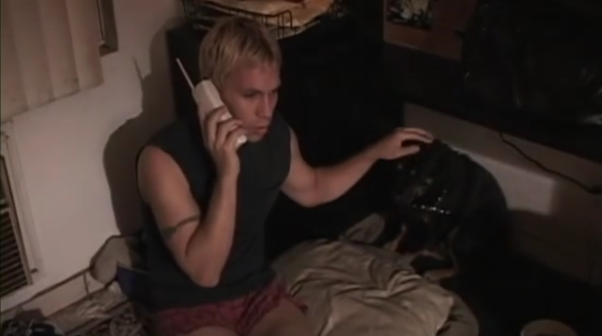 He leaves a third message, still unable to reach Arthur, before we see him flipping through a phone book, looking for a private investigator, as his tapping finger lets us know. 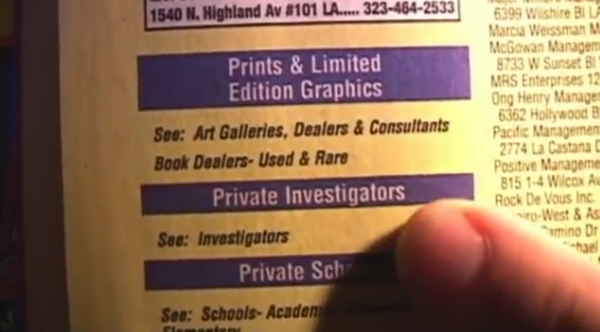 Some more ominous (seriously, very ominous) synth plays as we see this PI, who looks like he’s skipping class at this hour.

He meets with Victor in his apartment, and judging by the decor I’d say that Victor is likely closeted, as if we couldn’t suspect that already.

The PI (Justin Abraham is his name) explains he’s an intern, and this is his first assignment. He kind of fucks up right from the start when he explains that he feels this assignment is “morally wrong,” right after Victor explains he wants him to spy on his homosexual brother and find out his next move.

Why Victor wants a PI to spy on Arthur so badly is only left to the imagination. I mean, his “next move?” What does that mean? Does he suspect he’s slowly plotting to bring about armageddon? “First gay marriage, then ensuring the birth of the Antichrist.” But I digress once more.

Victor gives the guy $500 and tells him he’ll pay the remaining $300 once he brings him “what he wants.”

The PI somehow knows it will only take two days and assures Victor this, because people you don’t know anything about are entirely predictable. This guy should have a long career.

So, cut to two days later.