Obviously, Robert here assumes the same, but no; this woman says she doesn’t even know who Rose is, and that her name is Cherry, another red thing. Robert refuses to pay her until he receives the diamonds, but she has the receipt to prove that they signed for the goods, which the deaf bald guy shows to them. This results in Robert sicking his assistant on the deaf dude.

After slapping the shit out of the assistant, who escapes in fear, the deaf guy goes after Robert and traps him. Cherry says they can use him as bait.

Meanwhile, the assistant informs Walter that Rose is still alive, but Walter of course doesn’t buy it. Regardless, they both open the cylinder that Rose was in, finding it… empty!

Save for a mystery cassette, that is.

We are then treated to a ton of interesting shots of a Chinese parade as Rose (or Cherry) calmly walks through it, while George runs after her and yet can’t seem to catch up to her, navigating around a massive dragon.

He continues to chase her around random places for a little while, but when George finally stands looking like he’s lost his brain, the film decides we’ve had enough, and we catch up with Walter and the assistant dude as they listen to Rose’s tape in Walter’s apartment. Rose’s voice tells the two that she’ll get back at them for raping her by unleashing those much-loathed snakes, which drives Walter fucking bonkers.

Rose somehow knows they just finished listening to the tape and calls them from a phone booth, just to say, “I’ll be seeing you soon, sweetheart.” The camera did zoom in on a hole in the wall, but even if that’s a camera letting Rose know those guys were in the room, there’s no way she had anything that would’ve let her see through it as she’s walking around town. Portable technology in the ’80s was pretty much nonexistent, as far as I know.

Well, whatever. Walter sees her at the booth that just happens to be outside his window, and almost shoots at her with his pistol.

Cut to George having yet another riveting conversation with his father-in-law, as the old man points a sword at nothing. George asks him about his connection with the smugglers, and so the father-in-law talks about how his business was suffering, so he got involved in diamond smuggling to help with finances. He mentions some “Frenchman” whom we’ve presumably not met, but maybe we will? George actually calls his father-in-law “Larry,” so we finally know who Larry is, but not really all that much. Then George asks if Larry knows about Rose, but he says he doesn’t. This is reminding me a little of my confusion when watching Inherent Vice at this point, but this is a far better film, of course.

Larry asks if George will arrest him. “When I get the evidence,” he replies. George also admits he never had a thing for Jenny, and plans to divorce her. Quite the backhanded slap. Larry won’t let that slide, though, and threatens to kill George if he goes through with it, which doesn’t shake him.

Enough of that family drama, though. Time for more unexplained ninja killing set to the opening of “Stereotomy”.

He finally cuts up another photo of an unidentifiable ninja whose reason for targeting will likely go unexplained as well. We then see this presumed target in his red ninja costume as he does flips with rings, sticking his legs through them in midair. He’s just having a good time like the other red ninjas were until Donald shows up to ruin the fun.

They fight for not even a minute when Donald traps his body with a ring in an amazing way, and stabs him in the back. 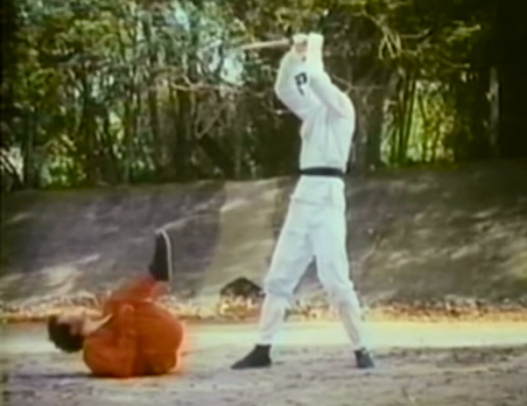 Can’t have ninjas in this movie for too long in a film called Ninja Champion, though. Time for Walter to find Robert trapped in the frigate. 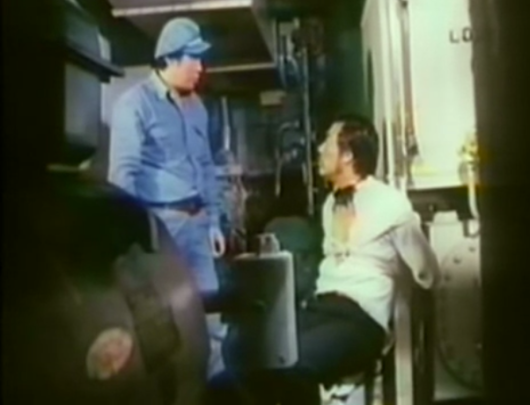 I thought Walter was supposed to be trapped somehow and perhaps die from snakes unleashed in his room, but I guess Rose just felt like scaring the shit out of him. Anyway, rather than free Robert, Walter stabs and kills him, saying, “Sorry, you got too greedy.” Right, and you’re not.

Walter heads to the upper deck, where he tries to stab what he thinks is a person but is actually a dummy, and thus winds up stepping into a rope trap that seemed to predict every action of his. This Rose/Cherry is smart.

Once he’s properly tied up and shirtless, our heroine confronts him to talk.

Turns out Cherry is Rose’s twin sister (their parents like red shit, don’t they?) and she’s planning on getting revenge for her. Also, she and Rose were working together as diamond smugglers. Sure, I’ll buy that. She threatens Walter with snakes if he doesn’t tell her who ordered the rape. After being raised a few feet on the crane he’s tied to, he says he’ll talk and apologizes for the rape, like all he did was give her a bruise. Then he says Larry was behind it all.

Instead of letting him go or even just kill him with snakes, Cherry has the deaf guy pull his pants down and she nearly cuts his balls off, until Larry’s men show up and tie the two up.

Larry politely introduces himself to her, as his assistant politely carries his sword as he probably does whenever Larry goes out, in case he comes across people he’s in debt to or whoever else he hates. 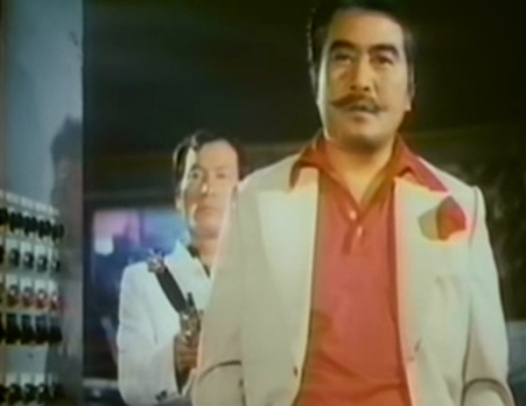 Larry, the heartless bastard, ordered the rape because George was cheating on Jenny with Rose. Somehow Rose and Cherry interfered with this “Maurice” fellow, which gives Larry cause to kill both women now. Just when I think Larry’s gonna pull the sword, he orders his assistant to do his bidding. He almost decapitates the deaf dude, but Cherry actually convinces them not to do so by saying, “Don’t He’s just a retard. Rose and I used to use him to run messages for us. He doesn’t understand what he’s doing, so please, you mustn’t harm him.” Wait, so you’re in diamond smuggling, a highly illegal operation, and you think a mentally handicapped guy (who still knows sign language at that) is the best person to use in that line of work? I almost think I might side with Larry here.

They almost do it anyway, as the “retard” thrashes about and grunts as he always does.

“Alright,” Larry says to Cherry. “We’ll kill you first, so when he dies, you won’t know anything.” Um, okay. Does it matter then which order you do it in if you’re just going to kill them both anyway? I’m confused once again by Godfrey Ho’s unquestionable brilliance, I’m afraid.

Rose spends some time talking to him and apologizing even though he just grunts and squints and shakes his head like nothing’s getting through to him. But just as they’re about to decapitate Cherry, George actually shoots the assistant’s hand off and reveals himself.

“Did you come here to get revenge sin-gle-han-ded?” Larry asks in an interesting manner.

George confirms he did, and spends some time having a slight verbal battle with Larry while nobody just goes ahead and shoots him there. And even though he doesn’t even keep his gun aimed at any of the other men with guns, they still kindly allow him to untie Cherry. Without the men intervening in any way, Cherry is then allowed to run to and pick up the dropped sword, run up to Larry, and promptly stab him.

Godfrey also feels the need to let us know of Larry’s doom by showing a pile of boxes falling on him three times.

George has a brief shoutout with all of Larry’s men, while stupid guy shoots a little and catches up with Cherry, grunting a lot. 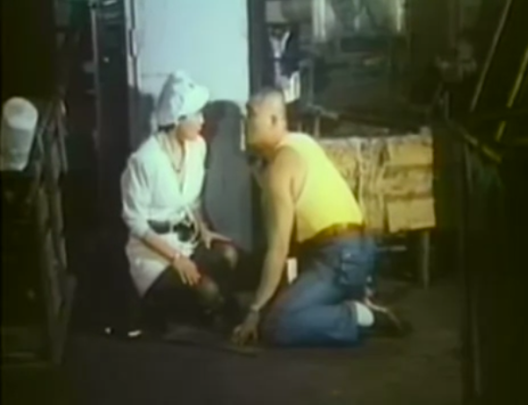 Like an ape, he makes more primitive noises and hand gestures that suggest he’s really saying, “Fuck George. Let’s bail.” But Cherry refuses to leave George, as a favor to Rose. Stupid dude relents, and they all try to escape together as a ton of police close in on the place, along with a couple of gangsters that I feel like I’m supposed to recognize based on how often they’re shown, but don’t.

Cherry and George stop in their tracks when they see this:

Is it the rocking horse? Have they never seen one? Is it not part of a Chinese childhood? Fucking hell, man. Oh, no. It’s the two black boxes that happen to be coffins. Cherry opens the one on the right, which holds Rose. Looks like even cruel rapist diamond smugglers who ruthlessly killed this woman will respectfully decorate a coffin.

We spend a couple minutes poring over this moment, as Cherry explains that Rose really loved George, and it’s all very lovely but they seem to have forgotten they’ve got to get the fuck out of there.

She opens the other coffin, which is empty. Great, it was clearly intended for you but now it’s not, now leave. But nope, George and Cherry just stare at each other longingly as Cherry explains, “Because we were twins, we were able to smuggle. It helped us confuse people.” In what way is that an advantage? Oh, just get the hell out of there! “When we found the rapists, it was Rose who killed them for revenge.” The exit. Find it. Talk about this confusing shit later. “But now I brought you here so my sister could see you one last time, and remember you for her.” Huh? Just GO! Just fucking GO!

George takes an eternity to close Rose’s dead eyes, and also spends forever vowing to never leave her and all that, even though she’s a corpse. Unfortunately, we don’t find out if they actually make it out of there, because it’s Donald time.